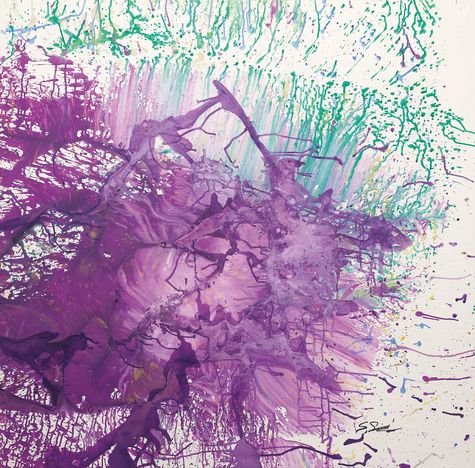 This painting is to be sold with a certificate of authenticity issued by Associazione Shozo Shimamoto and signed by the artist. (Archive ID 471)

In 2019, the first radical Japanese post-war artistic group "Gutai" had been devoted to a unique and extremely pure sense of creativity. With its members creating exciting and charming works of art, Gutai remains relevant on the world stage. Many art museums and galleries have organized retrospective exhibitions of various scales on Gutai, including Powerlong Art Museum, Fergus McCaffrey Gallery, Tokyo Opera City Art Gallery, Whitestone Gallery, and Alien Art Centre. Through the exploration of paint, Gutai once again demonstrates to the world its search for "Neo-spirituality", an artistic philosophy that focuses on the interaction between the body and the materials. It has thus established itself as an important school of Asian modern art, earning a spot on the international stage. In recent years, Gutai fever has been sweeping through the US and European art markets, as well as breaking records in Asia. Half a century after the founding of this art group, people have only begun to gradually realize that the core of Gutai is an independent artistic spirit and form expressed through performance, installations, technology, interaction, concept, and action. This artistic concept was one of a kind in the world at its time.

In the late stages of the Second World War, the exchange between Japanese art and European radical art became frequent, converging into a wave of abstract art. In 1954, Jiro Yoshihara founded Gutai. From then, a trend of anti-Western abstract art started to catch on in 1950s Japan. In 1955, Gutai held its first art exhibition at the Ohara Hall in Tokyo. In 1957, the French theorist Michel Tapié visited Japan. An advocate of the Art Informel, Tapié had become tired of the geometric composition in abstract art that was popular before the war. These feelings happened to coincide with the sentiments of Gutai. It was Tapié's writing that first introduced Gutai to the Western art world. In 1958, Gutai held its first US exhibition in New York City’s Martha Jackson Gallery, but was met with relentless criticism. The 1994 Solomon R. Guggenheim Museum exhibition, Japanese Art After 1945; Scream against The Sky, was widely praised. In 2009, Gutai's works were featured in the main exhibition area of the Venice Biennale. In 2013, the Guggenheim Museum held the exhibition Gutai: Splendid Playground, which once again received wide acclaim. Since then, there have been several retrospective exhibitions on Gutai in major museums and galleries, such as Tokyo 1955–1970: A New Avant-Garde at the Museum of Modern Art (New York City) and Destroy the Picture: Painting the Void, 1949–1962 at Museum of Contemporary Art (Los Angeles).

One of the core members of the Gutai is Shozo Shimamoto. In 1956, he attempted a new painting technique––by smashing a glass bottle full of paint against a canvas laid on a hard surface or rocks. As the bottle shatters, the paint within splashes onto the canvas, creating a lively and dynamic pattern that captivates visually. This unique method took the art world by storm, and also laid the foundation for Shimamoto's original series "uzumaki"(meaning whirlpool) in 1965. With important contributions to early Gutai art, he also provided the post-war art scene with much needed momentum by manifesting transformation and innovation within destruction, rebirth and liberation within total annihilation.

This work Heiwa No Akashi 2007-13 is part of Shimamoto's ambitious 100-year project, the Heiwa No Akashi (Proof of Peace) series. Starting in the year 2000, the artist would perform before the monument at Nishijima Yacht Harbour every year. The work is able to delight viewers as soon as they see it. The bright purple blooms in the corner of the canvas, like a cluster of flowers, immediately draw attention. Originating from the ancient Chinese worship of the North Star, purple is considered to be the color of regality in the Chinese tradition. This can be seen in the Chinese expression of good fortune, “紫氣東來” (purple haze comes from the east). Under this influence, Japanese nobility revere the color purple to this day. The past works of Shimamoto are also full of volatile elements, with multiple coats of paint layered on the canvas.

Heiwa No Akashi 2007-13 is a work obviously composed through much deliberation and thought. Much of the canvas is left empty, reflecting the Eastern philosophy imbued within the work. Although the picture is dominated by purple, the shades of the purple are intentionally different, due to the randomness of the bottle smashing technique. The expression of texture is the result of a secondary creation. By smearing the natural flow of the purple paint, the artist breaks its original pattern, converging it on the edge with turquoise, bright yellow and acid blue. Single-colored Shimamoto works are relatively rare. His creative process may seem unkempt, but the works are infused with the artist's understanding of peace. In 2007, Shimamoto launched a series of artistic activities with the theme of "peace" in closely-connected East Asian cultural circles. This is a significant work both in name and in its historical awareness. The Heiwa No Akashi series embodies the Gutai creed of "breaking away from traditional art materials and techniques; finding materials from the environment we live in and revealing their inner life."