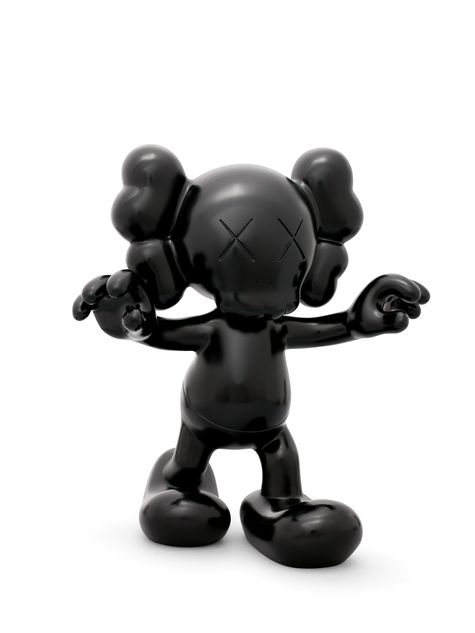 KAWS (real name: Brian Donnelly) was born in New Jersey in 1974. A multi-faceted, Brooklyn-based artist, he applies his iconic style of “cartoon aesthetics” to a diversity of graffiti creations. His works include graphic, product, and commercial designs, as well as paintings, sketches, sculptures, murals, and screen prints. Straddling the worlds of art and design while collaborating with a wide span of brands, KAWS has opened up unprecedented possibilities for artistic trends. In 2014, KAWS held an art exhibition titled, Final Days, at the Center of Contemporary Art of Málaga (Centro De Arte Contemporáneo De Málaga) in Spain. This was KAWS’ first solo museum exhibition outside the United States, featuring works that had never been shown before as well as showcasing new elements, such as wood treatment and distinct color ranges. The six black figures of various sizes, poses, and expressions exhibited in one large room attracted special attention. Classic icons such as Companion, Kurf, and Pinocchio were included in this work, all painted in pure black and wearing specific human-like expressions. As KAWS explained, speaking of his artistic practice of blurring the line between toys and sculptures "To me they involve the same thought process, so it's funny that when I work big in bronze,it's called a sculpture, but something I do that's small and plastic is called a toy...."